The past few months, ever since Trump’s election victory, have felt like a relentless shock and awe attack on the senses. Every day there are more outrageous and offensive “news” to take in. Our ability to sustain a constructive defiance to monied interests is becoming dulled by the constant onslaught of new “breaking news” in the 24/7 media. This is really dangerous.

It’s dangerous because even intelligent and educated people are losing their ability to stay objective in the face of so much tabloid garbage, designed to attract eyeballs through clickbait headlines.

Yes, politics in the US, and parts of Europe, have jumped the shark. It’s a reality show. Yes, Trump is a historically bad choice for president. He’s going to make historically bad decisions, due to both his personality disorder and the people behind the scenes manipulating him. We should protest this. We are protesting this. But we also need to keep in mind the system which brought us here.

Money in politics is so bad in the US that most politicians are up for sale, and fundamentalist Christian groups in rural America have a lot of money, due to their tax-free status. Politicians now have to tailor themselves to appeal to this large voting demographic, and we get fundamentalist politicians. Their policies have drained the educational funding for 30 years so we are left with an abnormally uneducated population for a first world country. These people easily fall victim to wealthy and powerful organizations that prefer to stay wealthy and powerful in any way they can, and historically, religion has proven a very effective mean to that end.

But politicians come and go. They are the shiny new apps on your iPhone’s interface. There is a deeper operating system behind the screen that actually make the phone work. We don’t see it, so we don’t realize it is there most of the time. The state works very much in the same way. We call it the deep state. The invisible, yet powerful, people who work there have been around for decades. It’s their career and life’s work. Whatever influences them is kept out of the media. It’s off limits. But we know it’s there because we can see the public trail of it in the continuous policy in presidency after presidency. Regan’s neoliberalism and free trade. Clinton’s NAFTA and revoking Glass-Steagall. Bush paved the road for perpetual war in the Middle East, and Obama rendered those wars invisible with the use of drones instead of soldiers on the ground. Apparently drones need not follow the Geneva convention and the law of war, and can freely bomb and kill people indiscriminately in Yemen, Pakistan, and Somalia. Countries that, last time I checked, the US is not legally at war with. Now they are Trump’s drones.

But none of this matters now because we live in the age of “alternative facts.” It’s the natural successor of “fake news.” We have always had fake news, it is called tabloids. It was when tabloids and the mainstream media merged during the dot-com revolution, when news stopped being sexy unless it was filled with scandal, that our troubles really began. This has been a long time coming. It peaked with Trump, naturally, because he is a natural-born showman who took early advantage of “reality” television. This is the one thing he is good at – to play the media, make them hang on to his every word, and distort reality.

The press in the US and other parts of the west have been embarrassing for the past 20 years. While posing as “independent” the major networks and newspaper have become little more than stenographers for the state. This is the opposite of what the press is supposed to be. If the state wants to go to war, which states tend to do because it is profitable, reporters are supposed to be asking “why?” and report from all sides of the issues – not merely stoking the fears of the public the way it is currently doing. A truly independent press is the cornerstone of democracy. There are plenty of brave reporters out there asking difficult questions and presenting alternate realities than the ones that advertisers on TV want us to see. Unfortunately, they are under attack right now being labelled as “fake news.” We all lose if the reality being presented by monied interests is the only one we are allowed to speak of. That’s tyranny. That’s the dark ages.

We got played. There is no way around it. We got played when we decided the press could fend for itself and left them at the mercy of advertisers. The best paid journalists today read from a teleprompter, while investigative journalists try to piece together a salary from crowdfunding on the internet. Please, please take note that all the recent Russia hacking news and hysteria about “fake news” serve a deeper and more nefarious purpose. Sure, to delegitimize the independent press and reporters is one, but we also need to be asking ourselves why would the deep state apparatus, over 30 of the alphabet soup agencies, so desperately want to demonize Russia and reinstate the Cold War?

Chris Hedges is a great reporter to look into if you want a crash course in alternative narratives. A Pulitzer Prize winning wordsmith, with over 20 years as a war correspondent and investigative journalist, he traces misuse of power back to its source and fights for the destitute populations left behind by the narrow neoliberal worldview presented by the establishment. Check out this short and current interview with Hedges (YouTube) for a brisk reality check! Abby Martin is a kickass millennial journalist who has been very outspoken about this issue since the beginning of her career, and champions media literacy above all.

Offering a different perspective than the state is not “fake news.” We don’t need dangerous laws against a free and open press, which this hysteria seems to be aiming for. But we do sorely need more media literacy to navigate the choppy waters ahead.

For those interested, here are some of the journalists and publications I follow because they seem most rooted in the reality I can decipher (see how tricky this all gets?)

Truthdig | Democracy Now! | The Intercept | The Empire Files | George Monbiot at The Guardian 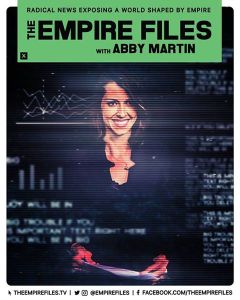 Please consider supporting honeythatsok by becoming a Patron for as little as $1 a month! Learn more at Patreon.com.