I’m a creature of habit when it comes to entertainment so starting a new TV show is kind of a big deal. I also stick with shows way too long, even after they have ceased to entertain me and I only watch out of loyalty to the characters. Occasionally the creativity picks back up but most of the time I guess I’m just wasting my time. (Although I vaguely remember something about reading bad books is better practice for writers than reading good books, and since being a screenwriter is my end game I’m hoping it works the same way with TV and movies. But I doubt it!) 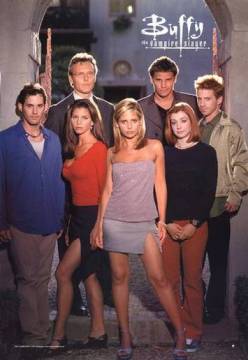 I’m also going to admit that I choose TV shows based on the level of attachment I have to an actor or show creator. What this usually means is that I will watch anything with any member of the Buffy the Vampire Slayer alumni. Read my love story with Buffy here. Sometimes this turns out to be a mistake (re: How I Met Your Mother. WHY WON’T IT END!? Who is the mother? I stopped caring 5 years ago.) But mostly it has resulted in some of my favorite shows, like Angel, Firefly, Dollhouse, Veronica Mars and Dexter.

For being such a TV aficionado it might come as a surprise that I don’t actually own a TV and haven’t for almost 10 years. I live on my computer, it’s my entire entertainment system. I own a camera, a Kindle and an iPod shuffle, I stole my boyfriend’s PSP, and that’s the extent of my gadgets. My phone is only used for calls and text messages. Yes, I am an online pirate. At least that part of my childhood came true. I’ve been torrenting since Bearshare and downloading one episode of Alias took four days at 3.4 kb/s in 2003. Since I 100% believe in supporting the arts I try to make up for my thievery by purchasing DVDs of my all-time favorite shows, and I usually end up reading any book series when a show is based on books so that’s a hundred dollars that the author wouldn’t otherwise receive. I just refuse at all costs to support the advertising industry, since they are the root of all evil (or close to it).

If you are uncomfortable with downloading torrents but still want to check out a show before committing to buy 1channel is a pretty safe and decent place to find online streams of almost anything.

Sometimes I just buy into the hype, like with Lost, Desperate Housewives, Breaking Bad, Californication, Pretty Little Liars and Game of Thrones. The latter actually ended up taking over most of my life in 2011 and I read the entire series instead of working on my thesis, oops. I also love crime shows, especially profiling and forensics. Apparently most people do, judging by ratings and what is being made. I still watch the original CSI. The first three seasons of Criminal Minds were amazing! I loved trying to find out which real serial killer the episodes were based on. The past couple of years have been weak in comparison but I understand that eventually you run out of real life material to base the weekly cases on. Law and Order: SUV is still going strong – 14 years!

Sometimes the random discoveries are the best. Spartacus was such a show for me. I’m usually not into gratuitous violence but I missed a show like Rome so I gave it a chance. Holy crap! First of all, where did they find all these women? One is more breathtaking than the other. Real life goddesses. The men are ok, too. Apparently Australia is where it’s at. But I digress. Given the nature of the storyline, Spartacus, gladiator and the liberator of slaves, it is going to be violent and intense. But it is just really masterful writing, too. I don’t remember the last time I felt so much for pretty much all the characters, whether that is hate for the Romans, sadness for unspeakable cruelty or passion from the love stories. It’s just an excellent show. I give it 9.5/10 and it’s the first on my list to re-watch now that it is complete after four seasons.

I was really going to review the NEW shows I have been starting in this post but it’s already long with nostalgia, so I will do that tomorrow. What is your favorite show, old or current? Do you have a top five list? Mine changes a lot!