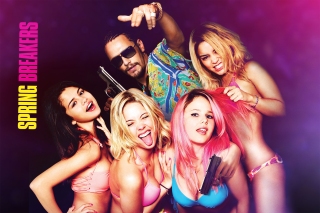 Damn. So I just watched Spring Breakers and I was honestly expecting some version of ‘Disney Grows Up’ Bubblegum Movie with a Morality Lesson at the end. Now I wonder where the hell I got that idea. What I got was a highly stylized, gritty, glamorous, pornographic violence fantasy set an unlikely soundtrack. So I looked up the writer/director. Harmony Korine of Kids fame. Ok, I get it now. The universe has once again aligned. Now I expected to really not like the movie, so imagine my surprise when I did.

The movie makes me sad, and I’m happy it makes me sad. The so-called glamour of collage kids gone wild is degrading to both women and men. Alcohol consumed with tubes, bikinis coming off, coke snorted off naked bodies. Beer bottles masquerading as penises and the girls can’t get enough. And that’s just the first minute or so.

I am a HUGE sucker for unexpected contrast in films so that’s the main reason this movie appealed to me, even more so than the story, which, when you sit down to analyze it, doesn’t amount to much and you have to leave logic and traditional chronological storytelling at the door. Every major event in the movie is not only foreshadowed but actually flash forwarded to five minutes before they happen, which you think would spoil things, but they actually make everything more suspenseful.

As we watch tacky scenes of young girls degrading themselves in front of groups of young men, we hear sweet voice overs of the girls relaying to their non-existing parents that they have discovered the meaning of life and found themselves on this trip. Paired with beautiful actresses, fantastic cinematography, slow motion and fast cuts plus a soundtrack that is so well done it almost manages to elevate the whole sordid ordeal to ‘art’. (Britney Spears. Art. Think about it.)

I found the YouTube clip below that someone filmed in a movie theater and laughed the whole way through. I’m loving all these opposite reactions.

I think it’s a movie that manages to give great insight into this generation which have been told to glamorize reality TV like behavior for quite some time now. And then the older generation, who are the producers of this lifestyle and generally the people in charge, sit back and gasp in collective horror when the kids just do as they are told. “Just pretend it’s a video game,” one of the girls say as they are about to commit a crime to fund their joy ride. I guess sometimes it takes a movie that is just so over the top to realize what a caricature our culture has become, too.