The fall down the rabbit hole is a long one – and often very painful. Once you start to deconstruct reality around you, you tend to alienate a lot of people. They are perfectly adjusted and don’t need your philosophical musings, thank you very much. 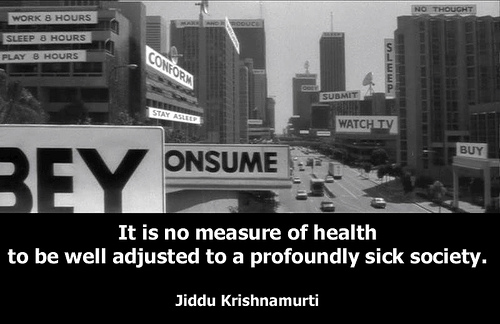 Vote with your dollars is something you will hear well-meaning sustainability-leaning people say a lot. I used to. I still do, to an extent, but it took a long time to realize just how difficult that is.

The idea behind voting with your dollars is to put your money where your values lie. If you are against animal testing on cosmetics, you make sure to only buy cosmetics that are not tested on animals. Easy, right? Not so fast. Did you know that The Body Shop (the most famous worldwide company for natural and ethically produced beauty products) is owned by L’oreal? I didn’t, and that’s when I tumbled into this particular rabbit hole.

L’oreal is the largest cosmetics company in the world. They own some of the  most recognizable beauty brands in the world, like Maybelline, Garnier, Lancome, Giorgio Armani, Yves Saint Laurent, as well as Matrix and RedKen for hair, to name a few. So while you think you have a lot of freedom to choose between brands and their ethics when shopping, in reality, you have very little choice. The money you spend flows one way and that is to the top. Recently, L’oreal acquired one of my favorite brands, Urban Decay cosmetics, whose stance on animal testing used to be ‘We don’t test on animals. How could anyone?’ I don’t think that jives with L’oreal’s attempt to lobby the EU to reinstate animal testing on cosmetics in Europe. How could anyone indeed. 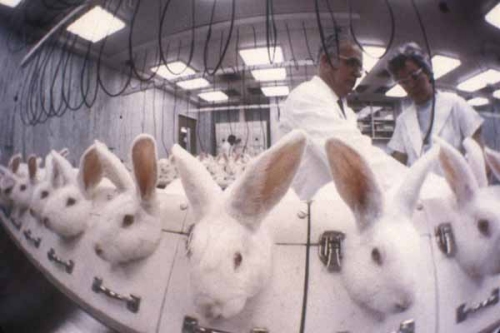 So I stopped buying beauty products at the drugstore and Sephora (my favorite guilty pleasure store, which, I found out, is wholly owned by luxury retailer giant Louis Vuitton Moet Hennessy) and I started buying my lotions and shampoos at natural food stores instead. At least this way I could be sure no animal testing and dirty money were involved, right? Wrong again.

This is the part of the philosophical musings that takes into consideration the evil of man and corporate greed. Are the two so different? When a pharmaceutical company withholds life-saving drugs for millions of people in the name of patents and profits, should they be tried for murder or celebrated as leaders of industry? In the society we are all so ‘well-adjusted’ to, it’s more of the latter. 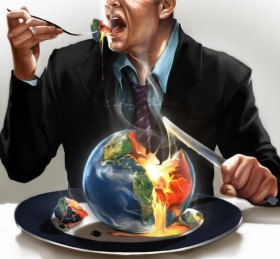 The stock market is a sociopath’s dream. It has no conscience. Money talks, and even when you have to walk across dead bodies to make a profit, you will be celebrated and envied for it. And the people who are very good at playing the stock market don’t care where their money come from, just as long as it keeps pouring in.

As it happens, sustainability is ‘in’. A lot of people want to spend a pretty penny on natural and organic products. What this translates to, in reality, is that as soon as a natural and organic brand ‘go public’ it can be bought and traded on the stock market. Then the big hawks swoop in and buy up the majority shares. They now own and profit from your favorite small business that you enjoyed supporting.

This is how the same people end up owning both Whole Foods AND Monsanto. It didn’t really click for me until I read Jon Rappoport’s blog post today. This is how deep the rabbit hole goes.

“Take the Vanguard Group. It’s the world’s largest mutual fund company. Corporations, smaller funds, and individuals place their money into the pot, and Vanguard takes it wherever it wants to go.

With 14,000 employees in offices in the US, Europe, and Asia, Vanguard manages $2 trillion in assets.

This is the world we live in. A place where it is perfectly acceptable to be reaping money from organic food and natural skin care, as well as warmongering, crimes against humanity, GMOs and NSA’s spying games ALL AT THE SAME TIME. Because just like sociopaths, we don’t care where our kicks come from and who gets hurt in the process.

But now you know. Are you still well-adjusted?

I realize it is unreasonable to expect everyone to stop buying stuff. Outside a handful of tribes in faraway forests, the rest of us would perish in a matter of weeks without money and commerce. Honestly, I hardly have any money and I still buy things almost every day. I just bought a new desk (made in Mexico) that I can write at so I can stop writing in bed and wreck my back. I buy vegetables, coffee, milk and fish and I try to get the local and organic kind. I buy $2.5 organic cinnamon buns from my local co-op because they are too delicious to pass up. And I still buy shampoos and conditioner, and recently I had to switch to L’oreal hair care because it is the only product in its price range ($7) that can keep my waist long hair soft and manageable. Does that make me a hypocrite? Should I cut my long hair in the name of sustainability? I look around me and I see people committing way worse crimes against the planet. I mean, some people still eat at McDonald’s. And so the marry-go-round of excuses continues.

True sustainability is not a quick-fix, and it’s certainly not a marketing gimmick. It will require a complete overhaul of our values and the way we handle our limited and dwindling natural resources. As long as money is above the law, it will always be hoarded by those who wish to be king. The first step is to expose their tricks. The monetary system is rigged. But there is a world beyond it in our imaginations. The second step is to unlock it.

Don’t fall for their call to inaction. 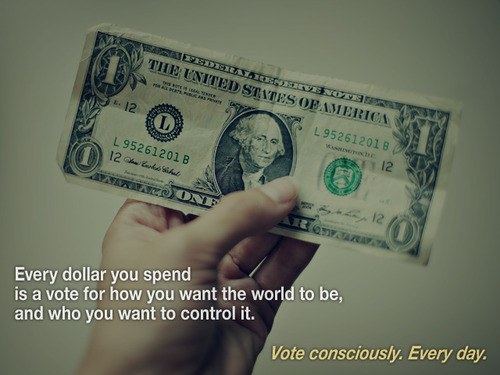